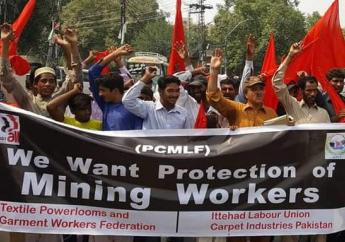 Unions in Pakistan held a day of mourning and protest on 28 September at the continued death toll in the country’s mines, and called for the ratification of ILO Convention 176.

Pakistan: 19 miners including rescue workers die in coal mine accident

19 coal mineworkers, including six rescue workers, have died in a horrific accident at Sanjidi coalmine near Quetta in Baluchistan province, Pakistan. In separate incidents on the same day, a staggering total of 23 mine workers were killed and 11 injured in horrific mine accidents in Pakistan’s Balochistan province on 5 May.

IndustriALL Global Union delivered this message at the African Mining Indaba, held in Cape Town, South Africa, from 5 to 8 February 2018. IndustriALL took its global campaign against Glencore to the London Mines and Money conference where it was joined by a broad coalition protesting Glencore’s abuses of workers, communities and the