‘You are helping save a farm’: CFMEU hay delivery changes fortunes 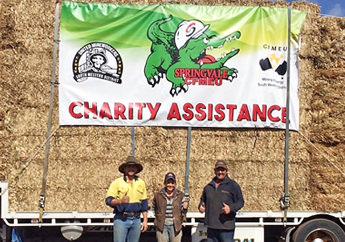 Three drought-affected farming families in NSW’s central west have had a reversal of fortunes after CFMEU Mining and Energy members delivered truckloads of hay to keep stock alive.

“You really are helping save a farm during this dry time, we’re at the end of our borrowing power with the bank for stock feed,” said one recipient of last week’s delivery.

Concerned about the impact of the drought, CFMEU Mining and Energy members at Springvale and Angus Place collieries at Lithgow voted to donate $100 each from their wages to support farmers, raising $32,500.

They identified farmers in need through charity Aussie Helpers. Springvale Lodge President Curtis Jones said farmers were looking out for each other at this difficult time: “one of the farmers we contacted had just received some hay – he said it should go to someone who needs it more.”

Curtis, along with CFMEU Springvale Lodge members Brent McDonald and Adam Morissey used their own time to travel to Horsham in Victoria, where they purchased the hay at a good price from Ellis Brothers Pastoral, and drive it back to NSW where they delivered it direct to farming families at Peak Hill and Yoval.

Curtis said the convoy of trucks received strong shows of support from the community along its journey. “The response coming back with the hay was unbelievable – it was a great trip.” CFMEU hay spotted on the road