10-day lockout for PKCT workers, board members urged to act 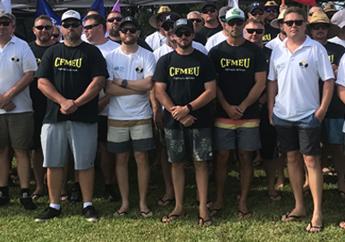 Port Kembla Coal Terminal workers received notice last night that they have been locked out for 10 days until Wednesday 27 February.

Board members are representatives of the consortium of local mine operators that run the terminal - Wollongong Coal, South 32, Peabody Energy, SIMEC mining, Glencore and Centennial.

"Our members at PKCT have negotiated in good faith, attending over 100 meetings with the company to try and reach a new agreement," Mr Timbs said.

"However, at a time casualisation has reached epidemic proportions in our region, they are not willing to stand by and let their permanent jobs be contracted out.

“We are happy to go back to the negotiating table when we have a guarantee that workers’ job security is protected. What’s the point of negotiating pay and conditions when the company can just terminate people’s jobs?

“Our members appreciate the support they’ve received from across the community. People understand that our region generates a lot of wealth for big companies, but we need to fight to protect rights and conditions for working people.”

Workers will continue to volunteer their labour for worthwhile community projects while the dispute continues, said Mr Timbs.

About the dispute at PKCT: