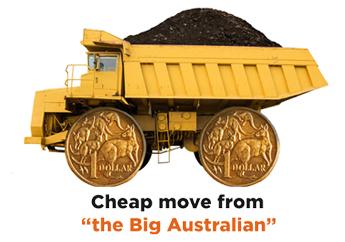 The Miners Union has today launched an ad campaign calling out BHP for dishonestly offering ‘BHP jobs’ to coal miners through shelf companies established for a dollar last year.

The new in-house labour hire subsidiary, known as ‘Operation Services,’ was set up by BHP to circumvent union-negotiated site agreements. Workers hired to work on BHP sites by Operations Services wear BHP uniforms, perform the same tasks as their BHP employees, but are paid 40% less. They also miss out on important working conditions like accident pay and can be transferred to any site in Australia at the company’s discretion.

Hundreds of workers are currently being recruited and deployed through Operation Services across BHP’s Australian coal mines, with pay packets about $50,000 a year less than the BHP workers next to them.

“BHP shareholders are doing incredibly well out of Australia’s coal, so the bare minimum BHP could do is offer Australians decent mining jobs with proper site conditions,” Mr Maher said.

“BHP have led the destructive casual outsourcing charge and now they’ve found an even trickier way to drive down wages by outsourcing jobs to themselves.

“Many of these Operation Services hires thought they were getting a proper job at BHP, because that’s the way it’s sold to them.

“Then they find out they’re earning 40 per cent less with worse conditions. It’s causing huge discord at coal mines. Unsurprisingly, turnover within Operation Services is also high, which is disruptive and bad for safety.

“By creating a cut price workforce through Operation Services, BHP is stripping money from Australian mining communities and transferring it directly to its shareholders. And this is a company that already delivered record dividends this year.

“Everyone who says they support coal mining should join us in calling out BHP for this dodgy, deceptive con job on Australian coal miners. Australia’s high-quality coal is a major money-spinner for companies like BHP - the workers who produce it should be valued and respected accordingly.”