The battle for Rothbury - 90th anniversary 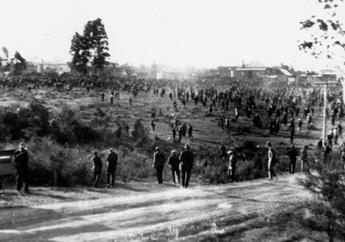 December 16 marks the 90th anniversary of the bloodiest clash in the industrial history of Australia. It took place at the Rothbury Colliery during the 15-month long 1929-1930 Northern District coal miners lock-out.

Remembering the events of 90 years ago, that took place in the heart of our Northern District, is an important occasion for our Union.

In 1929 Australia was heading into the Great Depression.

The workers who toiled in the Northern District coalfields were told to take 12.5 per cent pay cut, but they refused.

Instead of negotiating with workers, the mine operators went straight for the jugular.

They shut down the mines and locked mineworkers out in their thousands.

Conservative state and federal governments sided with the employers.

They rounded up thugs from the city, gave them badges and declared them to be ‘police officers’.

These so-called police officers became known as the Basher Gangs, and they roamed local streets, doing as they pleased.

Tension reached fever pitch when the mining companies brought train loads of scab workers up from Sydney so they could re-open one of the closed pits - Rothbury - not in order to mine coal, but in order to prevent the striking workers from accessing the dole.

It was a deliberately provocative act designed to break the will of the miners.

The flashpoint came on this day 90 years ago, the 16th of December 1929, when 5,000 mine workers descended on the Rothbury pit … to stare down the scabs.

They gathered behind a pipe band and marched to the picket line outside the mine entrance.

But when they arrived, the police were already there, waiting with their guns loaded.

Shots rang out, and in the chaos and confusion, dozens of miners were injured.

Men like Wally Woods, who had just turned 21. Wally was shot in the throat.

And Norman Brown, was shot in the stomach. He was just 28 years old.

His family described him described as quiet and unassuming, with a heart of gold.

He had the best years of his life in front of him.

And he died right there outside the Rothbury coal pit, bleeding, in agony.

An inquest was held but the police were cleared of any wrong-doing.

The Coroner said that Norman died from the “effects of a gun shot wound accidentally received”.

As the Great Depression wore one, things got even worse for the locked-out miners.

Finally, after long 15 months, the lock-out ended and the miners went back to work on the company’s terms.

But the story didn’t end here.

While the mining companies may have had their day, the workers were not defeated.

Throughout the dispute, mining workers from across the state supported their comrades through a 12.5 per cent support levy.

Local communities also stepped in to support the miners and keep them going.

That solidarity ensured that the workers, and their unions, survived the darkest days.

Within a few years, the mines in the Northern coalfields were 100 per cent unionised again.

They sought - and won - improved conditions:

The Battle of Rothbury turned out to be a pivotal moment in our country’s history.

It galvanised the working class, and ultimately it showed that when workers play the long game, they can win.

Rothbury paved the way for a fairer country.

We will always remember the courage of those miners who took on the companies, and took on the government.

We will always remember and tribute to Norman Brown – the young miner who lost his life. Do you want to find out more about the Rothbury Lockout? 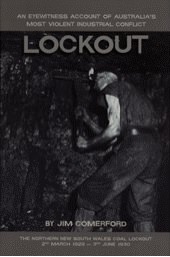 Jim Comerford, the legendary figure who led our Union as General Secretary, Northern District President and as a Lodge President, was a Rothbury veteran who witnessed the events first hand as a 16 year old mineworker. In 2006 he published a history of the Lockout; an eyewitness account backed up by detailed research and analysis.

Buy the book from our online shop: https://me.cfmeu.org.au/shop

In 2007 the film ‘Lockout’, directed by Jason Van Genderen and produced by Greg Hall & Diane Michael, was released. It includes interviews with men and women who were there as well as a dramatization of events, making it compelling viewing.
Buy the film at Ronin Films: https://www.roninfilms.com.au/feature/763/lockout.html