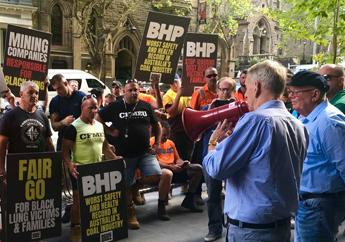 Victims of coal mine dust diseases and their supporters rallied outside BHP's plush Melbourne headquarters in an attempt to meet with the CEO of BHP and other senior executives.

The group is campaigning for the establishment of a victims’ support fund to help people with mine dust diseases and their families cope.

Mine dust disease victims have travelled from Central Queensland in an effort to get the attention of BHP CEO Andrew Mackenzie, who has so far refused to meet with them.

Victims’ advocate Jim Pearce – a former coal miner and Queensland State MP – said today mine dust victims would not accept being ignored by the mining corporations.

“Despite this, BHP does next to nothing to support employees who contract potentially deadly and debilitating mine dust diseases while working in their mines.

Frankly the Big Australian is behaving like the Ugly Australian.

“While highly paid BHP executives are hiding out in their luxury offices, these workers are battling simply to pay their medical bills.

“Over 100 Queensland mineworkers have already been diagnosed with mine dust diseases such as black lung and silicosis, and the number is growing by the month.  Around one quarter of these victims have worked in BHP mines.

“It is simply unfair that these mine workers who have been sent into the coal mine to do a job, didn’t have the protections in place to look after them. “It’s unfair that they should have to be just left to die quietly in the corner of their home and not have the mining companies accept some responsibility.”

Mr Pearce said the Mine Dust Disease Victims Support Group was proposing a modest 1 cent per tonne, per week levy on coal produced to go into the fund for sick workers and their families.

“This ask is not radical or unreasonable. In the US, coal companies pay a $US1.10 per tonne levy on each tonne of coal produced to assist mine disease victims.

“Our proposal would hardly be a blip on the radar of wealthy companies like BHP.

“It is time for the mining companies to do the right thing and support these sick workers.”