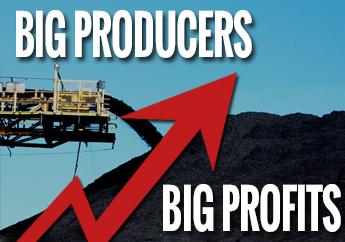 Australia’s top three coal producers, Glencore, BHP and Yancoal, recorded hefty profits last year from coking and thermal coal. These three companies control well over half of Australian black coal production and all have said they are enjoying great cash margins (reflecting profit after operating costs) of about 45%.

The exit of Rio Tinto from the global coal industry has seen it replaced in Australia by Yancoal and an even-bigger Glencore.  Rio clearly thinks the long term prospects for coal are poor, but right now it has said good bye to the healthy profits that the coal majors are making.

Glencore has a calendar year reporting period so we have their full year results for 2018. Glencore has very large trading activities as well as assets in many different minerals, so we need to separate out the Australian coal results.

Australian coking coal had revenues up from US$1.1b to US$1.3b, and EBITDA profit up from US$541m to US$673m. (Earnings Before Interest, Tax, Depreciation and Amortisation – a key measure of cash income after deducting operating costs.) Glencore claims a high cash margin of 46% on its coal business. An overall cash margin of US$40 per tonne. That’s a high rate of profit from any perspective.

BHP, which used to be the biggest Australian coal producer, had attributable production of 60 million tonnes in 2018. (It manages a lot more production than that, but the 60mt is its share of the various joint ventures.) As BHP is a diversified resources company, its total profits don’t tell us enough about the Australian coal business. But as with Glencore we can look at just the coal results.

BHP’s financial year is to the end of June, so its recent results are for the half year to end December. Queensland Coal revenue increased from US$3.35b to US$3.77b and EBITDA profit from US$1.5b to US$1.8b. NSW Energy Coal had increased revenue – US$799m, up from US$750m – but lower EBITDA profit – declining from US$304m to US$229m. That’s still a lot of profit from one mine  - Mt Arthur Coal - in the Hunter valley!

BHP’s cash profit rate on all its businesses is huge – it claims an overall cash margin above 50%. Coal has a cash margin of 45% and iron ore 59%.

Net profit was A$852 million, while EBITDA profit was A$2.2 billion, on sales revenues of A$4.85b and 50 million tonnes of coal. That indicates a cash margin of 45% - very strong cash flow.

So these three companies together own about 42% of Australian black coal production, and would control well over 50%. All have said they are enjoying great cash margins of about 45%.

Every producer will not be making the same great profits, but these numbers show an industry that is making loads of money. Earnings and profits will be lower over the course of 2019 as coal prices have declined. But these three companies all claim to be positioned for good profits for years to come.