Analysis of five coal mining electorates has found a stunning $989 million has been lost from local economic activity due to aggressive wage cutting-strategies by mining companies.

The new McKell Institute report analysed the impact on local economic activity of mining companies’ widespread replacement of permanent mining jobs with lower-paid labour hire workers. It found that regions with the highest proportion of coal mineworkers were missing out on hundreds of millions a year:

The report contains a detailed analysis of how the labour hire employment model has systemically been used to reduce wages that would otherwise have circulated through local mining regions.

"Outsourcing jobs to labour hire companies is a way for mining companies to get around Enterprise Agreements that have been negotiated by workers over decades," said Mining and Energy Union President Tony Maher.

"By using this wage-cutting strategy, some of our wealthiest corporations have been able to strip up to 40 per cent from the wages of Australian coal miners and remove conditions like redundancy entitlements.

"Right now the industry is booming and mine operators are struggling to find enough workers to dig coal fast enough to capitalise on the phenomenal prices. It simply cannot be argued that coal companies can’t afford to provide well-paid secure, permanent jobs.

"Our union has strived through the courts to expose and end the casual labour hire rort. But when we had big court wins that would have delivered justice to labour hire workers, the Morrison Government simply overturned them on the advice of lobbyists from big mining and labour hire.

"That’s why this Federal Election, our union has been campaigning heavily for ‘Same Job Same Pay’ laws, so labour hire can be used to address genuine temporary or specialist labour needs but not to undercut wages and conditions in existing Enterprise Agreements.”

Labour hire coal miner and Rockhampton resident Brodie Allen has worked in the coal mining industry for five years and has been employed through labour for the whole period.

“At my current site, the permanent workers earn about $40,000 to $50,000 a year more and they also have a range of conditions like not having to work on Easter or Christmas,” said Mr Allen.

“The permanent workers get protections around hours of work, work location and rosters, which we don’t. From my current position, there’s no pathway to a permanent job.

“Coal prices are booming at the moment but I don’t see any benefit flowing to me through better wages or conditions, it’s really frustrating. My employer always just says that they can’t improve conditions as they will lose their ability to compete for contracts.” 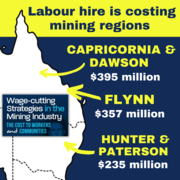