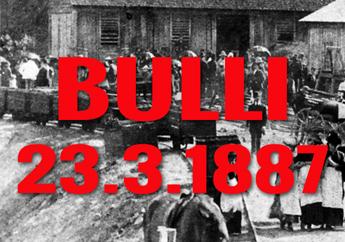 On March 23, 1887 the Bulli colliery blew up, killing 81 mineworkers. It was one of Australia’s worst industrial disasters.

The explosion occurred immediately after a fuse had been fired. The blast swept up the tunnel, making the mine an inferno.

Deadly carbon monoxide followed in the wake of the fire, and few managed to get to the tunnel mouth.

Three hours after the explosion the first bodies were recovered. Rescue operations were hampered by a lack of safety lamps.

A Coronial Inquiry and a Royal Commission found shocking negligence. Mine management had been aware of the presence of dangerous levels of gas for 2 years. Naked lights were commonly in use and shots were fired by lighting paper torches.

All of this happened in a sour work environment. A recent strike had seen activists who complained about safety get the sack.

The jury delivered a verdict that condemned mine management, finding that ‘the explosion was brought about by a disregard of the Bulli Colliery special rules and the Coalfields Regulation Act in allowing men to go to work where gas existed.’

It was not until 1890 that the Act was changed to implement changes to regulations regarding watering of dust, securing of safety lamps and the handling of explosions.

In remembering the miners who lost their lives at Bulli, and the families, loved ones and work mates they left behind, we know that in this hazardous workplace, safe work practices are paramount. For our Union, it’s a number one priority.