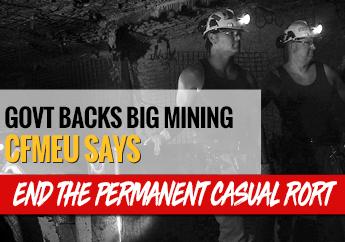 The CFMEU and former coal miner Paul Skene have sought leave to intervene in a test case brought by WorkPac seeking to overturn the Union’s landmark win on annual leave rights for ‘permanent casual’ mineworkers.

Industrial Relations Minister Kelly O’Dwyer has announced the Federal Government would intervene to back employers in the case of WorkPac v Rossato.

CFMEU National President Tony Maher said that with the Skene decision in August the full Federal Court had already made a clear ruling that casual workers are entitled to paid leave if their work arrangements are in practice actually permanent – and employers should abide by it.

“Rather than fix their dodgy employment practices and compensate workers wrongly classified as casual, WorkPac appears to be seeking to undermine this judgment,” said Mr Maher.

“The Federal Government has flagged its intention to step in and back the interests of big mining and labour hire companies over casual workers.

“The rort of employing workers on ‘permanent casual’ arrangements is out of control in the mining industry and our union will keep standing up for permanent jobs.”

Paul Skene’s legal battle for leave entitlements after being sacked from a Rio Tinto mine in Queensland set an important precedent for casual labour hire mineworkers.

“My case was about getting justice for casual workers who are being exploited in the mining industry,” said Mr Skene.

“Casuals work side by side with permanent workers and do the same work with the same hours and rosters but get paid substantially less and have no job security. It’s a rip off.

“I don’t want to see companies and the government succeed in winding back rights for casual workers.”