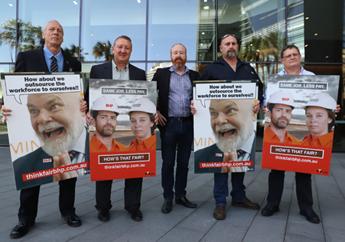 “Operations Services has always been a strategy of BHP’s to drive down wages and conditions in the mining industry,” said Mr Maher.

“These agreements are dodgy and the decision to approve them was dodgy and it is good to see that recognised by the Full Bench in today’s decision.

“BHP already has perfectly good enterprise agreements in place at its coal operations and their Operations Services employees deserve the same pay and conditions as those directly employed workers alongside them.

“Today’s decision is an important win but the fight is not over yet.  Our message to Operations Services workers is that we are committed to bringing your pay and conditions up to par with BHP employees. Same work, same pay.”

Both agreements were voted on by a small number of non-union iron ore workers in WA. They are intended to cover a workforce of thousands in the coal industry in NSW and Queensland. The Production agreement was voted up by just 9 out of 16 employees, the Maintenance agreement by 37 out of 50.

Operations Services worker are currently deployed at BHP’s Mt Arthur coal mine in the Hunter Valley and a number of BMA coal mines in Central Queensland.

Even though BHP’s marketing says there is ‘no difference’ between BHP and OS, these agreements lock in far worse pay and conditions for OS employees.

The OS agreements provide for:

The agreements were initially approved late last year and came into effect for OS employees from 26 December 2019.

The Full Bench of the Fair Work Commission will now rehear applications for approval of the agreements.