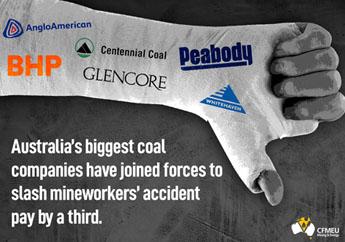 This week the Federal Court ruled against the Union’s appeal to overturn last year’s Fair Work Commission decision cutting the length of time injured workers are eligible to receive accidentpay from 78 to 52 weeks.

The Commission’s decision was in response to an application from 13 coal companies to reduce accident pay through the award modernisation process.

General Secretary Grahame Kelly said it was a disgraceful decision and poor use of the award modernisation process, which should not be used by employers to drive down standards.

“We are extremely disappointed our appeal against the cut to coal miners’ accident pay in the Award has been unsuccessful.

“Coal mining is a dangerous industry and the accident pay provision in the award has historically recognised that coal miners face unique risks at work and are required to be fully fit before working in a coal mine.

“This decision was made at the behest of mining companies and will see money flow directly from injured workers to mining bosses.

“It will lead to the earlier termination of workers with chronic injuries as employers rule them unfit for work at the end of their 12-month accident pay period.”

it is expected that companies will use this change to try and drive down accident pay provisions in Enterprise Agreements during bargaining.

“The companies have shown that accident pay is part of their cost-cutting agenda,” said Mr Kelly. “We will fight against any attempts by mining companies to water down accident pay provisions in agreements.”