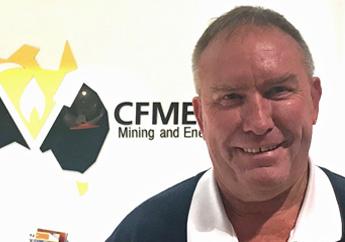 South West District President Andy Honeysett retires at the end of June, ending a long career as an underground coal miner and unionist. Andy is respected across the union as a determined fighter for members and loyal colleague.

“Andy was made to be a union official,” said his predecessor, former South West President Wayne McAndrew.

“He’s one of the fairest people I know, a real stickler for fairness. He wouldn’t tolerate bullying or heavy-handedness by anyone, especially the mine owners.

“He’d fight to the death for the membership. He’s loyal and supportive, it’s always good to have people like Andy Honeysett watching your back.”

Andy began his working life as a carpenter but joined the coal industry at Ulan Underground in the NSW Central West in June 1985 and quickly became active in the union. He became shift delegate in 1987, a Lodge Vice President in 1990 and Lodge President in 1993. He also served on the district Board of Management and Central Council before replacing Wayne as District President in 2009. He has served on the Division’s Central Executive and represented the union as a director of Coal Services and a member of the NSW Mine Safety Advisory Council.

In 24 years at Ulan Underground Andy was known for his constructive approach and was instrumental in making sure that increased coal production and the expansion of the mine in the mid-90s delivered better conditions for the workforce.

His straight-talking, pragmatic approach to resolving issues and securing the best deal for members has benefited coal miners across the district.

“In bargaining, Andy always puts the members first,” said South West VP Graeme Osborne, who will take over as District President in July.

“He has been a great advocate for our district and our union, his contribution has been enormous. He has done himself and his family proud.”

Now, he’s looking forward to spending time with his wife Kim at their Gulgong farm, putting his carpentry skills to use restoring the farmhouse and welcoming his fourth grandchild.

“Andy will be missed across the whole union,” said General President Tony Maher. “He is a great listener, he understands the members’ views and concerns and advocates tirelessly for them. He has played an important, constructive role at the national level. On behalf of the whole CFMEU, I wish him all the best in retirement.”