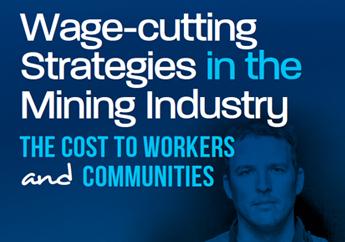 A new report by the McKell Institute has found that hundreds of millions of dollars is being lost from key mining region economies every year as a result of the widespread replacement of permanent mining jobs with outsourced labour hire.

It examines three coal regions* in Australia with the highest proportion of mining jobs, finding the direct and indirect economic impacts of the lower wages paid to labour hire workers is up to $825 million a year.

Considering that many more coal miners employed outside those regions, the cost of mining companies’ drive to contract out jobs is closer to $1 billion a year, said CFMEU National President Tony Maher.

The McKell Institute report, ‘Wage-cutting Strategies in the Mining Industry’, examines the systematic phasing out of direct employment by mining companies and models how much is being lost from coal mining communities due to the lower wages paid to contractors.

“Anyone with any exposure to the mining industry knows the toxic effect that labour hire has had,” said Mr Maher.

“What this report does is lay out the total impact in stark dollar terms and its brutal. If mining companies had continued to employ workers directly on existing site agreements the Hunter would be a quarter of a billion dollars better off this year and the regions surrounding Mackay and Rockhampton in Central Queensland would be over half a billion dollars better off.”

Mr Maher said BHP had made noises about listening to community concern about high rates of casual labour hire in the industry, but its response of setting up its own ‘in-house’ labour hire provider Operations Services was just another way of entrenching lower rates of pay and worse conditions.

Meanwhile, the Federal Government is actively working against improving outcome for casual mineworkers by backing employers to overturn Federal Court’s Skene decision, which found that mineworkers were not genuine casuals if their work arrangements were regular and on-going on long-term advance rosters.

“Now that the real cost of this practice has been laid bare, we should all be demanding change. We shouldn’t just accept the loss of $1 billion a year in economic benefit to Australian mining regions to line the pockets of mining executives and global investors. We need fairer workplace laws to end this corrosive practice.”

*The three regions selected are SA4 regions as defined by the Australian Bureau of Statistics. They cover a majority, but not all, of the Australian coal mining industry.