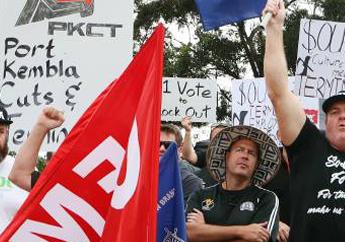 Locked-out workers at Port Kembla Coal Terminal (PKCT) are picketing, after management locked out its entire local workforce over the weekend.

Management at PKCT is represented by a consortium of coal companies including Wollongong Coal, South 32, Peabody Energy, SIMEC mining, Glencore, and Centenial.

The key sticking point in negotiations is an insistence from management on removing the job security clause from the new enterprise agreement, which would leave all jobs at PKCT vulnerable to instant outsourcing.

CFMEU Mining and Energy South Western District Vice President Bob Timbs said while the union had shifted considerably during negotiations in many areas, there was no room for movement on this point.

“Why else would management be trying to remove the long-standing job security clause? Without this clause, permanent employees can be sacked at any moment and replaced with casual contractors.

“But the people of this region are fed up with big coal companies replacing good, permanent jobs with casualised labour hire. It’s greedy and it’s unnecessary.

“Management’s hyper-aggressive move to lock out its entire local workforce will not cause us to back down. There is no sense in signing a deal that hands management a big axe and a license to swing it at will.

“Workers at Port Kembla Coal Terminal have had enough and they’re standing up. We will fight this until an acceptable position is reached.”