We are aware that WorkPac employees are being treated to regular correspondence from the boss of the company, Phil Smart. It is almost like since losing a major legal case over their (unlawful) treatment of casual workers, they have a sudden interest in workers’ views!

Let us take you through some of the points raised in Mr Smart’s letters.

Casual loading and “double-dipping” – what is the story?
In the WorkPac v Skene matter, the full Federal Court found that WorkPac casual Paul Skene was entitled to paid leave due to his employment conditions being full-time and on-going with an advance roster – in other words, he was really a permanent.
WorkPac claim that the flat rates they pay to employees include a casual loading. However, we are aware that most WorkPac employees are hired on a flat rate that does not specify the casual loading. In Paul Skene’s case, the Federal Court found that the flat rate did not contain a casual loading and that therefore, it was the appropriate rate at which he should be back-paid entitlements.
Casual rates at WorkPac are not 25% higher than the rates paid to permanent employees of the mine operators. In fact, we know that on average, labour hire employees are paid about 30% less than permanents employed by the mining companies.
Mr Smart’s claim that WorkPac employees have received the appropriate casual loading is based on the much lower hourly base rates applying to WorkPac employees. So when WorkPac claim that the Skene decision effectively endorses “double-dipping”, what they really mean is that they have priced their labour too low and now have to make back-payments that will cut into their profits.
When you take into account the fact that the average WorkPac employee employed under flat rates of pay will work an extra six weeks a year for less money than permanents, the whole issue about “double-dipping” is just a distraction.
Permanency – will you have to take a pay cut?
Claims by employers including WorkPac that permanency will come with a 25% pay cut are empty threats.
Labour hire companies have large contracts with mine operators to supply workers. They need you. At current pay rates, casual labour hire workers are earning considerably less than their permanent counterparts. With pay cuts of 25%, many employees wouldn’t stick around.
With coal mining activity picking up, we are aware that labour hire companies are already struggling to retain workers. We are also aware of some labour hire companies moving people from casual to permanent at the same rate of pay, as they simply wouldn’t keep them otherwise.
Mining employers are notorious for giving away nothing easily. But by sticking together, workers are able to achieve improved pay and conditions. This is the case for casual labour hire mineworkers too.
Permanency – will it be forced on you? 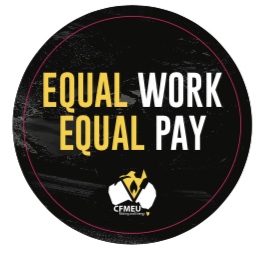 We don’t know whether to laugh or cry at Mr Smart’s assertion that the Union is trying to ‘force’ people into permanency and that conversion should be your choice. A strong permanent conversion clause was at the centre of the Union’s claim in recent EBA negotiations and was rejected by the company.
We absolutely believe it should be your choice and your right to become a permanent employee. However, it’s a false choice to ask you to trade off pay for it. You are already being paid too little for the work you do. Casual mineworkers employed by WorkPac work under the same conditions as a permanent employees and they should be valued and rewarded as such.
Backpay – are you eligible?
We are continuing to process claims for backpay in line with the Skene decision. We have received information from current WorkPac employees and are working through that. Claims may be held up until there is an outcome in the Rossato matter (see below).
Don’t let WorkPac scare you off with claims they will claw back past payments for casual loading. The fact is, you are not double-dipping. It is the company that has been ripping people off by employing them permanently but not providing the entitlements of permanency. They have been caught out and they don’t like it.
What’s happening in court?
WorkPac has initiated a new case in the Federal Court (WorkPac v Rossato) which they hope will effectively undermine the Skene decision.
IR Minister Kelly O’Dwyer has applied to intervene in the case, backing the employers’ position that casuals shouldn’t have rights to paid leave, even if they are effectively permanent employees. CFMEU Mining and Energy, as well as Paul Skene, have also applied to intervene in the case in order to protect the rights we have won for casual mineworkers.
The legal case is likely to have months to run and we will keep members updated with important developments.
Whatever the outcome in court, we will keep fighting for labour hire workers rights in the workplace and in our workplace laws.

The best way to fight the ‘permanent casual’ rort in mining is to join the CFMEU.