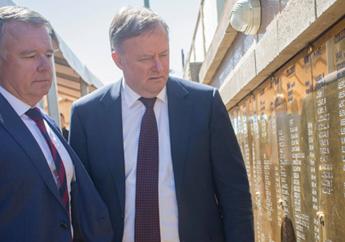 To stand here with you today, for my first time as Labor leader, is a sombre honour.

I acknowledge the traditional owners of the land on which we gather.

As we join here together as a union family, I would also like to acknowledge National President Tony Maher and District President Peter Jordan.

Twenty-three years ago, Paul Keating stood here alongside union giant Jim Comerford to unveil this wall of names. As it honours Jim, this memorial wall makes just one simple request of us - to “remember before God the men and boys who gave their lives in the northern district mines”.

Jim saw some of those lives cut short in 1929. Jim was a 15-year-old pit boy and he bore witness to the Battle of Rothbury, in which police opened fire on protesting miners who’d been locked out of their jobs. Jim survived the bloodshed that day but it shaped him forever. As Prime Minister Keating unveiled this memorial all those decades later, he described Jim as: “Quite simply a Labor legend, the embodiment of Labor's greatest ideals, of solidarity and the pursuit of justice for working men and women.”

Jim would have hoped that, as we gathered here nearly a quarter of a century later, we would be done with adding names to this wall.

Sadly, that job is not yet behind us.

There is a fresh name for this saddest of rolls.

And that name is Quinton Moore.

On November the 3rd last year, Quinton went to work at Bengalla mine – just a bit over an hour’s drive up the road from here near Muswellbrook. It was a bit before 8pm on that spring evening when Quinton went to do some maintenance on one of the mine vehicle’s tyres.

It was just routine, just another day at work. Except it wasn’t.

He has left a hole in the community, of which he was a popular and respected member. And most achingly, he has left a chasm in his family.

To Quinton’s widow, Shannon, and all the members of his family here today, we join with you. Some among us can more closely imagine your grief than others, but all of us are here with you. I know that some wounds are beyond even the healing powers of time, that there are absences that can never be filled. But I hope you can draw some comfort from knowing that you are never alone.

You have this community standing right beside you. You have the compassion and love of the union and the greater labour movement.

And of course you have the mining family, a family that feels every death keenly in its heart.

And it is a family.

Because to be a coal miner isn’t just another job.

It is forged into something even more powerful as you wrestle with the challenges and obstacles you still find in your way.

And you do it in the face of dangers of which you are only too aware.

Yes, the safety record has improved radically but the risks remain:

Few workplaces give such an unforgiving edge to the concept of being in the wrong place at the wrong time.

You are part of one of the toughest of traditions. You stand almost as a breed apart. Even at a time when our nation is so alive and uncertain with the tides of change and transition, those who lift the coal out of the earth have a powerful sense of who they are.

The father of one my mates was a coal mining engineer, very happily lured to Australia by a coal job not far from here in the Hunter. By 1979, he was working further south and was a regular underground at Appin. It was the luck of the draw that he wasn’t rostered on that bleak July night when methane and electric spark came together to create a hell beneath the earth.

Even towards the end of his days, he still thought about his mates who weren’t so lucky -- 14 men gone in a flash.

But despite everything, he still loved the mines. He loved being a miner. Decades after he walked out of the pit for the last time, he still identified proudly as a miner.

It’s a pride so many of you carry with you into the great open cut mines, or down the shafts into that otherworld beneath us.

You are right to be proud, given how much you have contributed to Australia’s growth and prosperity.

You’ve done it together, carrying the memories of past generations, working together to ensure conditions are better than they were for those who mined before you.

This union embodies that most Australian of principles that is at the heart of the labour movement – caring for each other, not just ourselves.

It is one of the most real challenges there is. No wonder coal miners have a reputation for being such straight-talkers.

It’s a reputation that recognises neither border nor language barrier. In the recent TV series Chernobyl, which depicted the Soviet nuclear accident, who cut through the tangle of bureaucratic lies? It was the coal miners, just as they did in real life, cutting through the falsehoods as surely as they cut through the rock beneath the crippled reactor.

They were down-to-earth blokes who stood tall when so many either could not or would not. In the midst of a very modern catastrophe, they embodied timeless values.

Those miners would have recognised kindred spirits here in the northern district coalfields.

It’s been a long journey since mining started here in 1817.

Unionism has been part of most of that journey. The drive to come together and organise and fight for the right of working men and women to safety, proper conditions and decent work started early here. And it started with a momentum and energy that has not wavered.

We are surrounded by so many reminders of why that had to be.

Travel a short way down the road from here and you’ll find many of them in the Old Wallsend Cemetery. Among them are:

David Adamson, who was just on the cusp of adulthood when he was buried beneath a fall of coal in 1869.

William Syme and John Mitchell, both claimed by a gas explosion in 1873.

James Brown, who left behind a widow and eight children when he was killed in 1878.

That cemetery is a stark reminder that death did not discriminate in the mines. It took veteran miners and novices alike. It killed those who had just started out, and those who were close to hanging up their picks for the last time.

It killed men with craggy faces. It killed boys so young that no civilised society should ever have allowed them anywhere near those pits.

And each of those deaths left behind its tragic shards: the widows and fatherless children, the heartbroken parents and shattered families.

Among them there were even women who were widowed more than once, and families who lost more than one member.

The Old Wallsend Cemetery is just a small snapshot of what happened right across the northern district coalfields.

This wall we are gathered by today performs the crucial service of keeping the full picture firmly in our minds and in our hearts. They are all here, their names held before us.

More than 1800 names, each one of them not just an individual human being, but a member of a family, a neighbourhood, a community.

More than 1800 men and boys, and sadly in recent years, women too.

More than 1800 human beings who lived and loved and were loved in return.

More than 1800 people who left terrible, gaping holes in their worlds when they were so randomly snatched away.

More than 1800 individuals who left empty places at dinner tables and family photos, whose birthdays lingered on as perhaps little more than a sad circle on a calendar and a visit to a grave.

All those years unlived. All that potential untapped. All those plans unfulfilled. All those dreams undreamt. All that promise forever broken. All that love ungiven. All those children suddenly denied a parent, left for the rest of their lives to wonder what might have been.

And, before the union drove the push to finally bring to an end the crime of child labour - something Australia achieved before even Britain got around to it - there were all those children who never got to grow up.

The youngest of the dead that we remember here is Robert Irving, a driver boy killed at the Co-operative Colliery at Plattsburgh in 1883. Robert was just 11 years old. He had barely tasted life. He never got to live as a teenager, let alone a man.

As you let your eyes move across those more than 1800 names, try to imagine their faces here among us now.

We hold them in our memories as best we can. And the simple but loving act of putting their names on this wall means they will never slip away from us.

We join here in grief, a grief that may slowly soften but will never fade until we ourselves do.

We hold each other as we hold on to their memories.

We join as a movement, as a family.

The union represents so much of that spirit. When it comes down to it, what is a union in the end but a community?

As we look at all those names, we give thanks that their ranks do not grow at the remorseless and terrible rate that they used to. But, sadly, they still do grow.

So much work has been done to improve things by miners, their unions, by management and mine owners.

Our movement has worked tirelessly towards that most fundamental of outcomes: that a miner can leave home to start a shift, confident that the end of that shift will see them coming home again.

But as Quinton’s death so harshly reminds us, we are not there yet.

We will keep working towards that. I believe that one day, we will achieve it. But we will gather here still, long after this wall has been given its last name.

And we will remember them all.