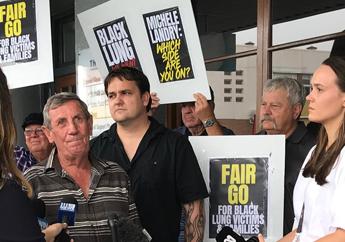 Mine dust victims and supporters tried to meet with Queensland Member of Parliament Michelle Landry at her electorate office in Rockhampton but she would not come out to meet with them.

The group were kicking off their campaign to ask politicians to support an industry fund that will provide care and support to victims of deadly mine dust diseases.

Victims’ advocate Jim Pearce – a former coal miner and Queensland State MP - says that it is vital for local politicians to get behind the campaign.

“Mine dust diseases are debilitating and often deadly. What’s more, the number of new victims suffering from dust-related diseases, such as silicosis, is growing.

“Up to 100 mineworkers are already paying a horrific price with deteriorating health and treatment costs.

"It is unfair that these mine workers who have been sent into the coal mine to do a job, didn't have the protection in place to look after them.

"It's unfair that they should have to be just left to die quietly in the corner of their home and not have the mining companies accept some responsibility.”

Mr Pearce said the Mine Dust Victims Support Group was proposing a modest 1 cent per tonne, per week levy on coal produced to go into the fund for sick workers and their families.

"This ask is not radical or unreasonable. In the US, coal companies pay a $US1.10 per tonne levy on each tonne of coal produced to assist mine disease victims.

"Some of Queensland’s coal operators are among the biggest and most profitable mining companies in the world. Our proposal would hardly be a blip on their radar.

"It’s shameful that these companies have refused to do the right thing. But we’re hopeful that with the support of our local political representatives we can get the justice and reform coal miners and their families deserve.”

Despite being given the brush off by Michelle Landry and the mining companies, the Victims Group has not given up and will keep up their campaign for the Mine Dust Diseases Victims Fund.