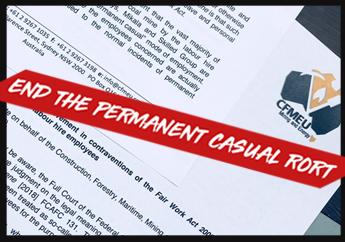 The CFMEU has written to the operators of all coal mines in NSW and Queensland to warn them they may be complicit in breaching the Fair Work Act by specifying that labour hire companies supply casual workers in circumstances that aren’t genuinely casual.

CFMEU National President Tony Maher said the rapid casualisation of the industry had been driven by mine operators, with labour hire companies competing to meet their demands in order to win contracts.

“Labour hire companies are the direct employers of casuals on mine sites. But our understanding is that mine operators commonly specify the terms under which labour hire workers are employed.

“Mine operators are on notice that if they encourage work practices on their sites that breach the law, they will be held accountable.”

The letters were sent to mine operators in response to the WorkPac v Skene Federal Court decision which says that employees who have an advance commitment to indefinite, regular and continuing work – like coal miners on 12-month fixed rosters – are simply not casual.

“We are concerned that you have insisted upon, or required, the provision of ‘casual’ employees by the labour hire provider in circumstances where you know that the work to be performed by these employees is in accordance with a fixed roster set well in advance and is performed on an ongoing, regular, full-time basis over an extended period.

In fact, for most purposes the labour hire employees assigned to your mine site are indistinguishable from your own directly employed permanent employees, as they work on the same crews, under the same rosters and under the day to day supervision of your company.

Therefore, the Union believes that the company could be complicit in breaches of the Fair Work Act 2009 (‘the Act’), if it has aided, abetted, counselled, procured or induced the making of offers of employment to employees of the labour hire company on the basis that the employees would be employed as “casual” employees…”

The Union has asked to meet with all mine operators to discuss measures to boost permanent employment.