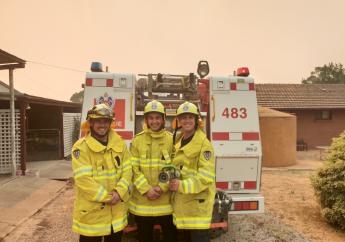 CFMEU members have been at the frontline of fighting the recent dangerous bushfires across NSW.

Fires have come dangerously close to mines and power stations in the western coalfields around Lithgow, with flames coming within about 200 metres of the pit at Springvale mine and production stopping due to poor air quality from bushfire smoke underground.

Fires have also come close to Angus Place Colliery, which is currently on care and maintenance, Clarence Colliery and Mount Piper Power station.

Springvale Lodge President Ben Smith said many Lodge members had been involved in firefighting during this year’s bushfires.
“We’ve had blokes constantly off fighting fires across the last three months, with the Rural Fire Service and NSW Fire Rescue,” said Ben.

“They have a lot of skills that they can bring to firefighting. They are mines rescue trained – each pit has individual fire teams – and mine operators are out on fire rescue bulldozers pushing in containment lines. They all pitch in where they can.”

Ben is part of the local fire brigade at Wallerawang and has been out on the fire truck this week as fires came close to the town.

South Western District President Graeme Osborne said that while the major employers were supportive of mineworkers taking paid time off to fight fires, some contractors had refused to pay mineworkers. The Union has intervened, calling on mine operators to make sure all workers on their site don’t lose pay if they are fighting fires.

“It’s unacceptable that mineworkers fighting fires end up out of pocket,” said Graeme.

“After all, the fire-fighters’ efforts are also protecting the mine assets. They are doing an incredible job for the whole community.

“It’s a very tough time for the community right now. Thanks to all our members and all the volunteers who are giving up their time and putting themselves at risk to protect lives and property.”