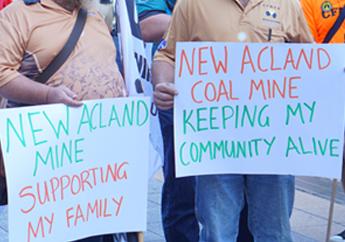 Workers at New Acland have emphatically voted down a proposed enterprise agreement that would shaved locked in a toxic two-tier wage system at the mine.

Of the 191 votes registered, 170 voted ‘no.’ The manager of New Acland mine, New Hope, had sprung the vote on workers, despite the matter being before the Fair Work Commission.

“Workers at New Acland mine are not as dopey as New Hope had hoped,” Mr Brunker said. “Ramming this vote forward was a sneaky and disrespectful move and workers saw straight through it.

“Instead of trying to be too clever by half, New Hope should simply negotiate in good faith. The ‘same work, same pay’ provisions their workers want are completely reasonable and completely achievable.

“The two-tier system at New Acland cannot continue. It’s unfair, destabilising, and toxic. New Hope’s intransigence on this issue seems driven by greed. We are talking here about a company that boasted a profit increase of 96 per cent to $361 million last year. They can afford to act with decency.”

Mr Brunker said the vote offered the chance of a circuit breaker.

“This vote should never have been held, but there’s now an opportunity for New Hope to take a deep breath and reassess its approach,” Mr Brunker said.

“We can get a deal done here if they come to the table. Drawing this dispute out will only create bad blood. In my experience it’s very hard to rebuild goodwill between management and workers once it has been eroded.”

A meeting between the union and management is scheduled for Wednesday, 22 May.