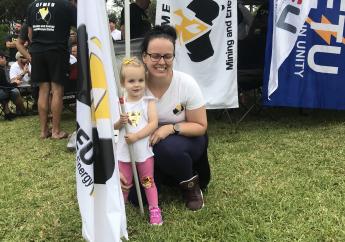 CFMEU members at Port Kembla Coal Terminal have rejected the company’s latest offer in on-going Enterprise Agreement negotiations and vowed to step up their fight for genuine job security.

In response, PKCT’s South 32 management has locked workers out for another week.

“All these workers are asking for is a commitment that their permanent jobs will not be cut and replaced by contractors. We are not seeking any limit on using contractors to meet genuine peaks in demand.

“However, casualisation is out of control in our industry and our region. We won’t accept good, local permanent jobs being cut, only for the same work to be carried out by casual contractors.

“The latest offer from South 32 management falls far short of a genuine commitment. They are taking the mickey.”

Workers were frustrated at the lack of progress in negotiations, said Mr Timbs.

“We’ve had over 100 meetings with management during the course of EA negotiations. We’ve had long stretches with no industrial action. We have compromised on many matters.

“We won’t compromise on protections against permanent jobs being converted to casual labour hire jobs. Management has had plenty of time to talk, now we need a genuine offer.”

About the dispute at PKCT: