'Permanent casual': time for employers to accept the jig is up 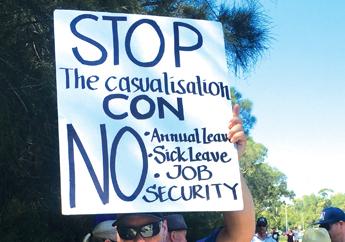 A Federal Court decision has exposed the widespread, dodgy practice of employers incorrectly classifying workers in on-going jobs as casual and it is time employers accepted their obligation to offer permanent work.

CFMEU National President Tony Maher said the Australian Industry Group’s hysteria over the impact of the Workpac v Skene decision underlines the extent to which Australian workers have been ripped off by the ‘permanent casual’ trend.

“The AIG’s own analysis shows that a majority of Australians employed as casuals work on a regular, on-going basis,” said Mr Maher.

“If the Skene decision has a cost impact, that shows the extent to which workers’ lost pay and entitlements have been subsidising company profits.

“The court has been very clear that employers can’t just label workers as casual because they want to and it’s cheaper.”

Workpac v Skene is a case brought by CFMEU Mining and Energy involving a Queensland mineworker employed as a casual by labour hire company Workpac for two and a half years.

In August, the full Federal Court upheld a previous decision that Mr Skene could not properly be considered a casual under the Fair Work Act due to the regular and continuous nature of his work on a fixed roster and was therefore entitled to receive accrued annual pay on termination of his employment. The decision has a wide application for casual employees across the workforce.

“In many industries casuals are paid substantially less than permanent workers.

“In coal mining where Paul Skene was employed, casual labour hire workers are typically paid an hourly rate of 30% less than permanents and they have no paid holidays, sick leave or job security.

“This isn’t double dipping, it’s a double whammy for casual workers. Employers should stop complaining and accept the jig is up.”