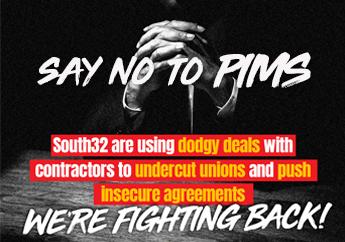 The CFMEU Mining & Energy Division is urging contract coal miners in the Illawarra region not to sign any employment agreements with PIMS Group, after the project manager backflipped on a deal to ensure decent wages and conditions at Appin Colliery.

PIMS Group, a new entrant in the heavily-used Illawarra contract labour market, earlier this year negotiated a deal to ensure fair wages and working conditions for contract coal miners at Appin. However, at the request of Appin Colliery owners South 32, PIMS has now agreed to outsource its employees from WorkPac, leaving the future contract mine workers employment covered by the inferior WorkPac enterprise agreement.

“This is a nasty, greedy smoke and mirrors trick dreamt up by South 32 and administered by PIMS Group,” Mr Timbs said.

“It’s a sad day when we have companies like PIMS and their project managers plotting against Illawarra miners for the benefit of rich coal companies.

“We believed we had an agreement in principle with PIMS for fair and reasonable conditions for what would have been their workforce at Appin. But it appears South 32 refused to have the worker friendly conditions at Appin, so PIMS and South32 have decided to use a company with a substandard agreement to employ the PIMS workforce. It’s shoddy, it’s dishonest, and it won’t wash in our region.

“PIMS is a newcomer in the Illawarra and it couldn’t have got off to a worse start. Right now we are urging all coal miners to say ‘no’ to any employment with PIMS until it stops playing its dodgy game with South 32.”

Mr Timbs said South 32 was actively damaging the local economy and putting the safety of coal miners at risk.

“South 32 is artificially suppressing wage growth in this region by telling contract companies who they can employ and the pay and conditions they can have,” Mr Timbs said.

“If South 32 want to dictate how contractors are paid they should employ them directly. But they won’t, because then they can’t rip workers off while hiding behind a veil.

“South 32 believe labour hire employees should not be paid the equivalent of permanent employees and treat contractors like second-class citizens. They need to be called out and exposed.

“This region and our community has been ripped off by mining companies turning permanent jobs into contract labour positions. Now South 32 is setting up for another race to the bottom and the losers will be local workers and the community.”

Mr Timbs also took aim at an irresponsible incentive-based bonus system offered by PIMS at the request of South 32.

“South 32 want an incentive-based bonus which we believe drives high risk-behaviour in one of the most dangerous working environments on the planet,” Mr Timbs said.