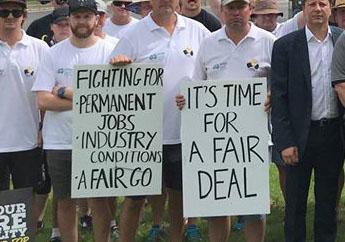 The key sticking point in negotiations is management's refusal to carry over the previous job security clause, which prevents a sacked permanent employee being replaced by a  casual contractor.

"The union cannot agree to the removal of a legally enforceable clause that protects our members from being sacked and replaced by contractors," Mr Timbs said.

"The company has been playing silly games this week by jotting down a few hollow statements of intent and offering that as a 'job security clause.'

"But you can't put feathers on a dog and call it a chicken. And it's insulting to workers, and the Illawarra community, to try.

"Because of the company's refusal to negotiate reasonably on this pivotal point our members have been left with no choice.

"They will strike and they will continue to take industrial action until a decent outcome is reached."