Tony Maher: Another nail in the coffin for ‘permanent casual’ rort 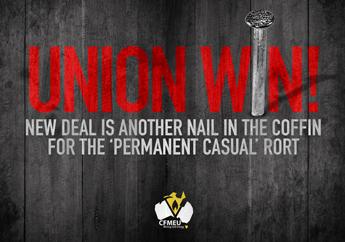 The CFMEU has made more progress this week in our fight against exploitation of casual labour hire workers in the mining industry.

A Federal Court order to quash One Key’s substandard RECS agreement follows a lengthy legal dispute over the labour hire company’s business model of driving down costs through cutting workers’ pay and job security. The Court agreed with us that the RECS agreement voted up by just three people was dodgy, left employees worse off and was not legally valid.

We have negotiated a new greenfield agreement with One Key’s parent company Fircroft that will cover all employees and lock in rights to permanent employment.

The agreement includes better pay – 6.5% above the award and annual 2.5% increases for three years; much better job security with guaranteed conversion to permanent work at the employee’s request after 12 months continuous casual employment; and workplace rights including union delegate rights and arbitration of disputes.

The right to permanence will be a huge relief for the many coal mineworkers stuck in insecure casual arrangements for years on end, as is so common in our industry.

We also have an agreement with the company over compensation for CFMEU members underpaid under the dodgy RECS agreement and we will continue discussions with them in the weeks ahead to finalise arrangements.

While all workers in the industry benefit from our efforts to raise standards through better workplace agreements, we think it’s only fair that compensation we win through legal action flows directly to Union members.

Our deal for One Key workers follows a landmark legal victory on leave entitlements for long-term casuals less than two weeks ago. It is another nail in the coffin for the ‘permanent casual’ rort in coal mining and a reminder of why it pays to belong to your Union.