Trailblazer Kerry a role model for women in mining 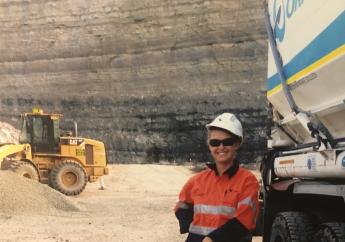 Kerry Koneiczny started in the mining industry as an operator at Camberwell Coal in 2002, but soon had her eye on swapping trucks and drills for explosives.

“When I got into a mine site and saw a blast go off I thought, ‘that’s what I want to do’,” she says.

Kerry has worked as a shotfirer for the last nine years, now at Ravensworth Open Cut mine after Camberwell stopped production in 2014.

Managing the explosions that clear the way for excavators to access the coal seam in an open cut mine is complex work. Shotfirers have to make sure they fill the holes made by drill rigs with the right mix of explosives to achieve ultimate fragmentation so that truck drivers aren’t hurt by large rocks, while minimising fumes and environmental impact. While some blasts can be set up in a day, others can take weeks to prepare, depending on the location and the depth of the overburden seam. For Kerry, it is interesting and exciting work. “It was an adrenaline rush when I started and it still is now,” she says. “I enjoy the challenge.”

Kerry is one of just a few female shotfirers in the Hunter Valley, although there are many more women in the mining industry now than when she started. “When I first started there might be four women on a mine site, now there would be several on each shift.”

The increase in women in the mining industry has led to important changes like the introduction of paid parental leave and return to work programs that support new mums.

Recently, after seeing a young woman expressing breastmilk in the bathhouse, Kerry approached the site WHS manager about setting up facilities for breastfeeding mums to express and store breastmilk. That space has now been set up.

Kerry joined the Union when she joined the industry, with support being especially helpful when her third child was born 13 years ago.  She credits her site delegate at the time - Shane Thompson who is now Secretary of the Northern Mining and NSW Energy District - with helping her negotiate a part-time return to work from maternity leave that suited her, not just the company.

Kerry is now a delegate at the Costain Lodge and member of the District Board of Management. She says that being involved in the Union has given her confidence to address issues and solve problems in the workplace.

“They have given me skills in how to approach it when I’ve got an issue, so I can get a result without it becoming an argument. I know I’ve got that experience and knowledge behind me.”

District President Peter Jordan says Kerry does a terrific job representing members and played an important role during the bargaining dispute with Glencore at the mine in 2017. “Kerry is a wonderful person, very genuine, and we are so proud to have her on our Board.”