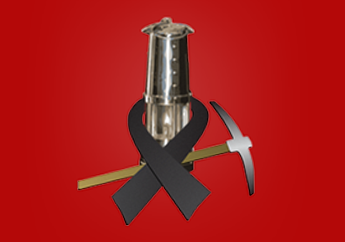 With great sadness we have to report the death of Dennis "Sharkey" Jones, who was a leading figure in our Western Australian District. It was Sharkey who formed the Rio Tinto Karratha Lodge and turned it into a union stronghold against all the odds; an outpost of unionism in a hostile environment.

On behalf of all CFMEU members, we would like to express our deepest sympathies to his wife, Lynne and his sons, Brett and Andrew. His unwavering efforts and contribution to the CFMEU will never be forgotten.

Before he died he wrote a message which he requested to be released after his death. It deserves wide circulation and it is published here today:

It is with a mixture of sadness and great pride that I write my last formal communication to you all. As you maybe aware I have been off work for sometime now and unfortunately there is no prospect of my return to the work place in the future due to illness.

Having said that I'd like to part with some brief reflections on my involvement with the CFMEU Karratha Lodge over the last decade. I'm sure it would still be very clear to those brave originals whom came together at the start and put in the efforts to organise and unite the workplace and the reasons WHY.

Whilst very few from that era remain from a management perspective today, it is still clear that some of  those ideologies towards the workforce remains firm today and must not go unchallenged.

The progress and history we have achieved together in this part of the Pilbara has echoed across this great country, rest assured we are the outpost, the frontier, isolated, fragmented by locations and shift arrangements but we are functioning,successful and proud. The tests and challenges faced by us were many -
•    From reforming an official lodge.
•    legal challenging and repealing unlawful so called collective agreements made under the guise of the then new FWA.
•    Legally winning the right to collectively bargain our EA as operationally distinct employees in this industry.

All mostly done in the courts BUT not without the unwavering support from the members , with the unanimous support for protected industrial action to back our position and the patience of 18months of delay action we would not have broken the chains of the individual take it or leave it contract system. Reaching the first collective agreement in nearly two decades of individual substandard workplace arrangements was no small feat and personally one of my proudest moments of my time working alongside you all in very testing times.

Moving onto the current EA , which was originally presented directly to employees without any input by us, again proved our solidarity on the ground with a resounding NO vote returned (correct you are allowed to say no a poor EA). After many meetings across sites and with management an agreement was finally reached that gave us certainty and the commitments from the company that we needed going into the uncharted waters of automated operations.

Having attended all the site discussions prior to and during the voting was on reflection a wonderful experience. So many varied views and emotional responses to the unknown! Fantastic debates but the importance of the discussions was clear that every members opinion and vote is and was as worthy of the next. I firmly believe that those following events and disputes since the 2014 EA are now, if not then, a validation of the support of this EA which was vital in delivering the most secure outcome for ALL our members.

Whilst still currently in place today I am comfortable looking forward to the next negotiations to say that you WILL be challenged on a range of terms and conditions almost demanded by the business. Time and time again we have proven that even with difference of opinion among the rank and file, if we stay focused on the key issues and ignore the school yard rumours, we have always reached our desired outcomes which is to benefit us all -Truly an extremely rewarding experience.

One thing I would hope to leave the members with is that they have bore witness to time and again that despite any personally held opinions in regards to the issue or the personalities involved, that I have managed to act without fear, favour or personal gain, for that is what the role requires. From the carman's ute to the footplate, from the district office to the National office,I could not respectfully name all I'd like to thank so, I cannot thank you all enough for your support of OUR Lodge.

In closing I must publicly recognise the love, support and understanding shown to me, but also to my beliefs and principles by my beautiful family Lynne , Brett and Andrew. Over the years Lynne has not just endured the rigours of raising a family under our shift arrangements but carried the burden so often to release me to pursue the needs of the cause.We would not have made it anywhere without her!

My two proudest achievements in life , Brett and Andrew Jones, whom have grown into fine , principled upstanding young men. (thanks Lynne). Taking on the role when they were just 6 and 8 they have made thier own sacrifices to the cause in their own way! But even back then, they as they do now, understand the basics , fairness !

As mentioned at the beginning I am unable to return to the workplace again, most unfortunately unable to bid you farewell in person.

I have one parting request , please do not let the successes of the past decade slip by in vain, ask yourself this , what type of workplace do I want to leave my kids? Karratha Lodge (Sharkey in back row at left) in 2012