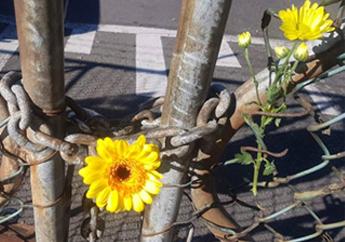 Truck driver Mark Roberts has died after a shocking accident at Port Kembla Coal Terminal last week. CFMEU members, who are locked out of the terminal due to a bargaining dispute, are devastated. They have placed flowers at the locked terminal gates as a memorial to Mark.

An inspection by CFMEU safety reps following the accident revealed serious concerns about the safe operation of the site while the permanent workforce is locked out – including lack of site supervision and an inadequate emergency response system.

South West District Secretary Lee Webb said the union was alarmed that the terminal was continuing to operate before the accident has been properly investigated and safety systems have been audited.

“If coal loading continues, we fear someone else will be hurt. We have been given no indication from management that safety systems for rail receival and loading have been audited – we think there’s a very good chance PKCT is operating unsafely.”

Aggressive lock-outs during a bargaining dispute mean that the permanent workforce, including site Health and Safety reps, have not been on site for over two months.

PKCT workers have been at the rough end of unfair bargaining laws, with the Fair Work Commission agreeing to the employer’s request to terminate their existing agreement before a new deal was in place. "In this day and age, it's all casual labour,” said terminal worker Nicky Ostach. “If we don't fight for our jobs, our kids won't have the benefits of permanent, stable employment."

Negotiations for a new agreement began in 2015. Since that time, permanent jobs covered by the EA have been cut from 107 to 51. In 2017, workers voted down the first enterprise agreement proposed by management. In 2018, the existing agreement was terminated by the Fair Work Commission, with a 12-month ‘drop-off’ date to allow for resolution of resolve outstanding superannuation and pay issues.

However, once the termination date of 29 March 2019 was set, management changed its position and insisted on removing the job security clause.

South Western District Vice President Bob Timbs explained that PKCT workers have given ground in many areas but agreeing to remove the job security clause would be like handing the terminal’s multinational owners - Wollongong Coal, South32, Peabody Energy, SIMEC mining, Glencore and Centennial - a license to sack them and replace them with casuals.

“Workers are being asked to negotiate when they can’t be confident they will still have jobs to negotiate over. It looks like PKCT is waiting for the agreement to expire to pressure them into accepting a sub-standard deal. It’s wrong.”

Industrial action taken by our members at PKCT has been met with extreme retaliatory lock-outs. So far, they have been locked out of their workplace for more than fifty days this year.

They’ve used the time to volunteer in the community, doing maintenance and gardening work for local organisations. They’ve also received strong support from across the labour movement.

Bring on the election “This has been a well-executed plan for making our jobs less secure. We will not accept companies locking out their workforces, cancelling agreements and casualising the workforce.

“This election will be a referendum on fairness; the companies can pick which side they are on. We will make them the poster children for greed, of inequality, of the Americanisation of our working lives – bring it on.”

Meantime, the community is grieving the loss of a local worker and family man. “The workers are gutted,” said Lee Webb. “Our deepest sympathies are with Mark’s family and friends. We will do everything in our powers to understand what has caused this tragic accident, prevent it happening again and hold those responsible to account.”