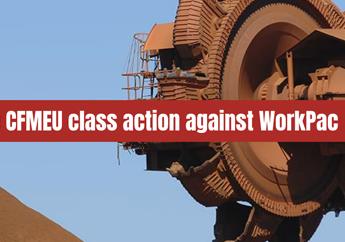 The CFMEU has filed a landmark class action to win back millions of dollars in unpaid entitlements for coal miners misclassified as casuals by labour hire firm WorkPac.

The union’s class action against one of Australia's largest labour hire companies will aim to recover entitlements worth at least $12 million owing to around 600 union members employed by WorkPac since 2013.

The lead applicant is Hunter Valley coal miner, Ben Renyard, who worked at Mount Thorley Warkworth mine through WorkPac for nearly three years.

Despite doing the same work, on the same roster under the same supervisors as permanent employees, Mr Renyard was one of a majority in his crew employed casually on a flat hourly rate, with no sick or annual leave, and no job security.

“The reality of coal mining these days is that the only jobs available are casual labour hire. I hoped it would be a stepping stone to a permanent job,” said Mr Renyard.

“At Mount Thorley Warkworth, I worked on a crew alongside permanent workers on the same annual roster with the same supervisor, but I got less pay and no entitlements like annual leave or sick leave. As a casual you are treated like a second-class citizen.

I hope this class action puts the pressure on employers to stop exploiting casual workers.”

The class action follows last year’s Federal Court ruling in the matter of WorkPac v Skene, which found that casual coal miners in regular on-going employment with advance fixed rosters were not legally casual workers and were entitled to paid leave.

CFMEU National President Tony Maher said the Skene judgment had exposed the rort of hiring workers as ‘permanent casuals’, which is widespread in mining.

“At many Australian coal mines, half or more of the workers are employed as casuals in jobs where the nature of the work is not casual at all.

“This rort robs workers of their legal entitlements and siphons that money back into the pockets of rich mining company shareholders and executives.

"Ben's story is emblematic of a mining industry reliant on systemically short-changing its employees. Ben spent years working in what was effectively a permanent job but being called a casual and so not getting any entitlements.”

The closed class action covers CFMEU members who were employed in coal mines by WorkPac for a continuous period of at least three months since 2013. Around 600 members have currently registered their interest in joining the action. Their unpaid annual leave entitlements alone are estimated to be worth more than $12 million.

“Unlike class action law suits funded by profit-driven litigation funders, every single cent recovered by the CFMEU’s class action will go directly back to the affected workers," said Mr Maher.

"All CFMEU Mining and Energy members who have been employed by WorkPac since 2013 have been invited to join the class action at no cost. Any affected WorkPac employee who is not a union member should contact the union to see how they can get involved.”

The class action was filed yesterday by national law firm Slater & Gordon on behalf of the CFMEU Mining and Energy Division.

FIND OUT MORE AND REGISTER YOUR INTEREST AT CLASSACTION.CFMEU.ORG.AU