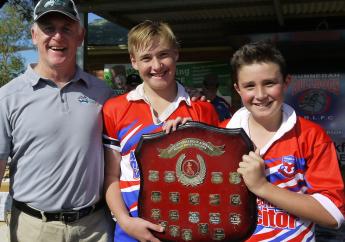 Over 250 kids from primary schools across the Gunnedah region in northern NSW gathered for a great day of rugby league competition at the annual Coalminers Cup Carnival in April.

The Coalminers Cup, established and sponsored by the CFMEU Northern Mining and NSW Energy District, is a long-running tradition in Gunnedah now in its 22nd year.

The event started out as the United Mineworkers Small Schools Carnival and focuses on giving kids from small local schools in mining regions an opportunity to participate in team sport, said CFMEU Organiser Ross Whitaker.

“We have teams from all the local schools in Gunnedah, Narrabri, Boggabri and Manilla. These are all coal mining areas. “Some of the schools in the smaller towns like Mullaley, Somerton and Maules Creek are tiny with only 10 or 15 kids in the whole school.

“The Coalminers Cup gives them a chance to form composite teams and participate – the kids and their parents really appreciate it.”

The Carnival had a strong showing of girls for the Oz Tag competition this year, with Barraba Public took out the girls’ Oz Tag trophy.

Narrabri West Public School won the boys’ rugby league competition after going through the round robin competition undefeated. They are this year’s proud holders of the United Mineworkers of Australia Primary School Challenge Shield.

It was a thrill for the kids to have former Parramatta Eel and Canberra Raider Brad Williams to present the awards.

The kids had a great day out and formed memories for a lifetime, said Ross Whitaker, himself a former Greater Northern representative rugby league player.

“Almost every Gunnedah first grade Rugby League player over the last 15 years has played in the Coalminers Day and remembers affectionately the T-Shirts and goodies they received on that day.”

Other generous sponsors of the Coalminers Cup include Mine Super, Unity Bank, Slater and Gordon Lawyers, Country Rugby League and Namoi Valley Lodge.

“It was a great day for the kids and for the community, we are looking forward to doing it all again next year,” said Ross.