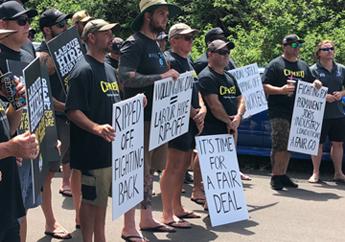 Mineworkers at Wongawilli Colliery, who commenced a seven-day strike this morning, have now voted to apply to extend that strike by another seven days.

The strike follows a vote by workers in December to take industrial action to improve employment conditions at the mine, which are the worst in the region.

The workforce of nearly 100 mineworkers is outsourced to contractor CAS Mining. Workers, who have been employed as casuals, are trying to negotiate their first enterprise agreement.

Today, workers on the picket line focused their anger on Wollongong Coal owners Jindal Steel and Power, the India-based company that ultimately decided to outsource employment to CAS Mining.

“It’s not legitimate for Jindal Steel to profit from Australian resources while hiding from their responsibility to Australian workers. Jindal needs to be exposed and held accountable,” said CFMEU Mining and Energy South Western District Vice President Bob Timbs.

“These workers are not casuals and should be treated as the permanent employees they are.

“Wongawilli mine is a classic labour hire rip-off. Across mining and the broader workforce, employers outsource workers to labour hire companies to drive down wages and conditions.

“Jindal Steel and Power needs to take responsibility for the fair treatment of local workers. Stop hiding behind CAS Mining and give these workers a fair go.”