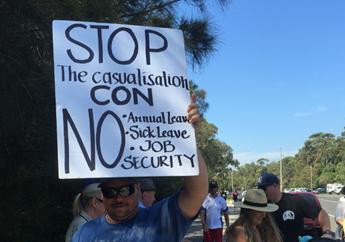 This week, the full bench of the Federal Court delivered an important decision in the matter of WorkPac v Rossato. The Court’s decision was a big win for our Union and a big loss for WorkPac and the ‘permanent casual’ work model.

It upholds key principles of the landmark August 2018 WorkPac v Skene decision, namely that work which is regular, on-going and permanent in nature is not genuinely ‘casual’ and therefore attracts entitlements such as paid annual leave. The full bench also ruled that WorkPac could not ‘set off’ money supposedly paid as casual loading against leave entitlements owed.

Paul Skene was a casual labour hire coal miner employed by WorkPac and member of our Queensland District, working a typical 7/7 roster set 12 months in advance. In his case, fought over four years by our Union, he argued that his work arrangement did not fit the legal definition of a ‘casual’ and was therefore owed annual leave entitlements under the National Employment Standards.

In August 2018, a full bench of the Federal Court agreed that Paul was owed leave entitlements, paving the way for other casual labour hire coal miners to also claim unpaid entitlements and effectively declaring the ‘permanent casual’ work model so commonplace in mining an illegal rort.

The Skene judgment was a blow to WorkPac. Instead of appealing it to the High Court they initiated a new case in the Federal Court with hand-picked employee Robert Rossato, in the hope of undermining the Skene decision’s definition of casual as intermittent and irregular and obtain a favourable judgment on the issue of ‘set-off’ to reduce their potential financial liability for backpay claims. The full bench rejected their arguments and found that like Paul Skene, Robert Rossato was also not a genuine casual and was also eligible for paid leave entitlements.

What does the decision mean for members?

In reinforcing the Skene judgement, the Rossato judgment paves the way for long-term casuals to claim unpaid leave entitlements. This decision is relevant to members who are or have been working in the following circumstances:

The Union is pursuing claims for unpaid leave entitlements on behalf of members, beginning with current and former WorkPac employees via our class action (see more at classaction.cfmeu.org.au).

The benefits of this decision will flow to all workers in mining and other affected industries by mine operators and labour hire companies reviewing their employment arrangements and relevant entitlements.

The Union will only pursue legal claims for compensation for Union members. If you have affected co-workers who are not Union members, please encourage them to join and remind them that class action law firms jumping on this decision to drum up business will take a substantial cut from any settlement they reach. Only the Union can guarantee that the recovery of entitlements will be free of charge and that all of the money recovered will go to the employee.

Will the government reverse this win for casual workers?

Employer groups are in a frenzy about this decision, which is the second time the Federal Court has called out the ‘permanent casual’ labour hire model as unlawful. They claim it will generate billions of dollars in backpay claims and cripple small business. This is a nonsense.

The decision is highly relevant in coal mining and some other parts of the economy where the outsourced labour hire business model is prevalent. These employers are large multinational mining and labour hire companies, not mum and dad corner stores. In other industries like hospitality, casual work arrangements are more likely to be irregular and intermittent in line with the legal definition and community expectations.

Industrial Relations Minister Christian Porter has said he will review the decision and consult with employers and unions about its implications.

Employer groups are urging the Government to introduce a new definition of casual to the Fair Work Act as an employee who is ‘engaged and paid as such’. We are urging the Government to adopt a definition of casual as ‘intermittent and irregular’ in line with the Skene and Rossato Federal Court judgements, and plain common sense.

We know there is deep community concern about exploitation of casuals in coal mining and other parts of the economy. With this case we have had an important win and we will keep up the fight to restore good, permanent jobs to our industries.